Afghanistan is rich in traditions and customs, and has long been a melting-pot for an array of ethnic groups and cultures. The country is geographically positioned at the meeting point of 4 major cultural areas: the Middle-East, Central Asia, the Indian subcontinent and the Far-East. 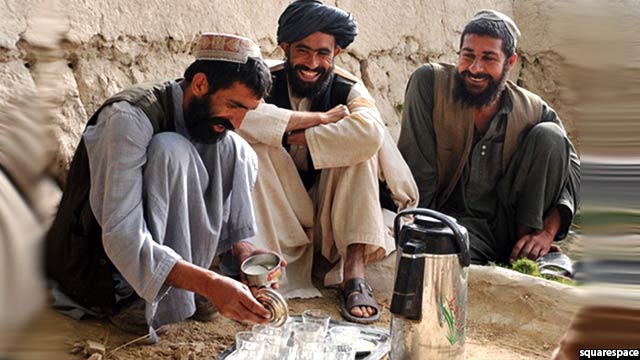 Hospitality is an integral part of Afghan culture, with the best possible food being served for guests, always following a cup of delicious tea, of course. Tea is drank multiple times every day, is offered to all guests and most families have their own recipe.

Food is traditionally eaten communally, sat on large colourful cushions called toshak placed around a low table called a sandali. From kebabs and palaw to marinated meats and fruit, a variety of special dishes are prepared throughout the year. Whether during religious celebrations or festivals, or at engagements and weddings, there is always an excuse to eat well.

It is whilst listening to music when the various linguistic, ethnic and regional cultural traditions of Afghanistan are perhaps the most prominent. Folk music from the southern Pashtun regions, that come in the poetic form of a landay, composed of nine and thirteen-syllable lines, contrast with the Dari four-line chahar baiti form traditionally found in the West. Fused together with western-influences with the foundation of Radio Kabul in 1941, a nation-wide Afghan style of music began to form. It was this era that produced internationally famous Afghan artists such as Ahmad Zahir, and later Farhad Darya.

How Internally Peaceful Societies Are Formed

Jaswant Singh: A look into life of Vajpayee era stalwart